How we found an approach to digital native metallurgists

The project was implemented by the teams of Nornickel, CROS and CrosDigital and in 2019 won the “Silver Archer” award in the nomination “Best Project in Corporate Communications”.

At the end of 2017, Nornickel launched pilot production at Bystrinsky Mining and Processing Plant (Bystrinsky GOK), a new asset in the Trans-Baikal Territory. It was a flagship project for the company in terms of the technologies used, the volume of infrastructure development, attracted to the region investments and social security spending.

Nornickel had to deal with a serious issue at the launch stage: provide Bystrinsky GOK with workforce. The plant was to become the largest employer in the region and one of the largest HR projects in the metallurgical industry in recent years. The HR department needed to fill more than 2 000 vacancies with specialists of different qualification and experience. To put that in context, companies in the industry on average attract to a new facility not more than 500-600 people. Moreover, Bystrinsky GOK was to receive unique equipment that has never before been installed in Russia. This meant that qualification of workers had to be higher than the industry average. And still, the new staff had to have additional training.

The Trans-Baikal Territory could not satisfy the staffing needs of Bystrinsky GOK, so it was decided to use five neighboring regions as labor force “donors”. Applicants evaluated not only the employer’s offer, but the region proper as the place of residence (the mining and processing plant is located 500 km from Chita).

To attract workforce to Bystrinsky GOK, an advertising campaign was launched covering six regions. It included advertisements in the media and on HR websites, work with employment centers, POS in the Russian Post offices and at railways stations, outdoor advertising in regional transport (buses and minibuses) – traditional for HR communications channels and tools. This allowed to fill just over half of the vacancies.

In mid-2017, at the time of the most active stage of the recruitment campaign, Nornickel HR specialists understood that the potential of the donor regions was largely exhausted. Therefore, in order to attract workforce, they decided to try other communication tools and involved CROS and CrosDigital in the project. 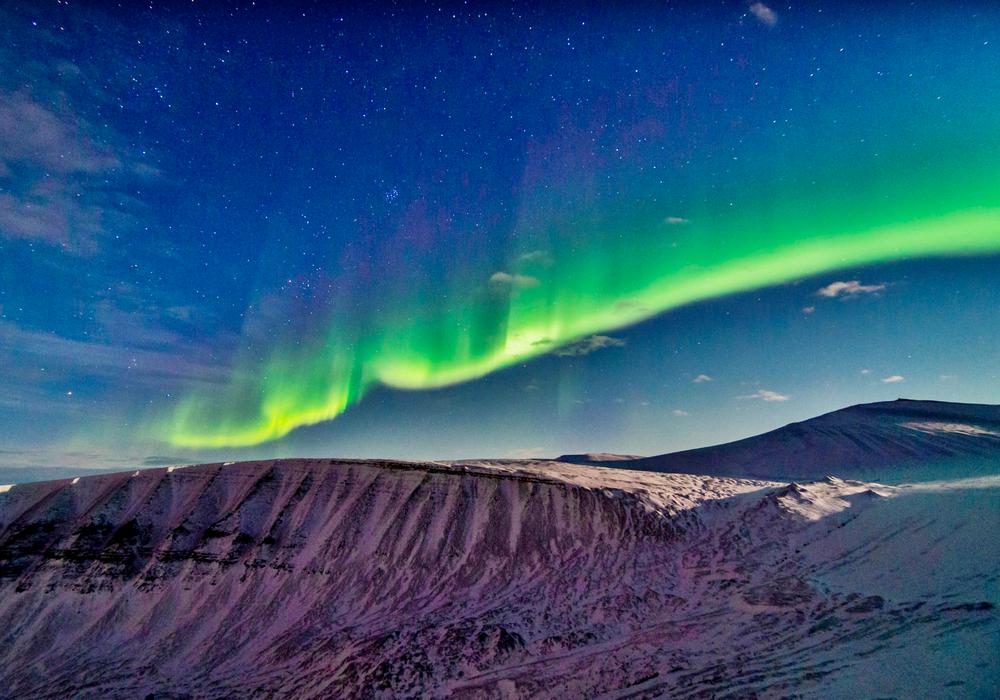 After additional research, the agencies proposed to change the communication approach. The new campaign strategy was based on the hypothesis that modern engineers and workers, just like representatives of other professions, are digital native and are most sensitive to communications through familiar online channels. In this regard, it seemed logic to use digital channels as an efficient hiring instrument. They became the core of the comprehensive project to promote the recruitment campaign. Moreover, this solution allowed to increase the reach of the target audience and awareness among potential applicants who did not have publicly available online CVs but who were active in the social media.

The project team also took into account that digital native candidates make a decision about employment using mechanisms similar to those when making a purchase. It determined organization of interaction with target audiences according to the laws of marketing communications. The brand should think about the employee experience of its (future) employees in order to attract new staff. Interacting with the brand should be comfortable and easy at all stages – from the initial search for vacancies to accepting a job offer.

Management of Nornickel’s HR brand image became an important component of the project. Features of the metallurgical industry imply high competition for vacancies and a long hiring cycle of about two months, including preparation of documents and a medical check-up (required by the Russian legislation for such categories of industrial facilities). For the employer, it means keeping constant contact with an applicant who has not yet passed this cycle, and supplying him or her with information, as well as monitoring feedback of the candidates who have not passed the selection and responding to it. This function was based on continuous social media monitoring and active work of account moderators.

Finally, the third pillar of the strategy was the marketing mix of digital tools. Research and experience of the preliminary advertising campaign showed that representatives of the target audience were more willing to react and engage in communication in their comfort zone – online. Therefore, the campaign was organized in such a way that the main contact points were the public accounts “Work at Nornickel” on VKontakte and Odnoklassniki social networks.

Using an integrated approach to the campaign implementation, we have achieved the optimal combination of tools:

The company’s official HR accounts on VKontakte and Odnoklassniki social networks operate as online receptions for applicants. Here, users can find all the information about Nornickel, ask any question and even submit a CV for a vacancy they are interested in.

Media landscape monitoring showed that there were negative and questioning comments of the social media users. At the same time, mentions of the HR brand were localized in the communities of the regions of operations, in specific industry public accounts, and most often on the social networks VKontakte and Odnoklassniki, as well as on regional online forums. Thus, the HR accounts were created in these social networks.

The project’s content plan is determined on the basis of the most frequently asked questions in the social media and call centers, as well as the analysis of posts by social media tools and external analytical systems. This allowed to identify the most relevant topics and to get a good overall focus of the campaign.

The accounts are not designed for “growth [of subscribers] for the sake of growth”, therefore, the number of subscribers is about 8 000 people in total. However, their total reach exceeds 2.6 mln users and increases significantly in periods of situational activity.

Developing relations with audiences is another important area of the project. The Q&A team works in both the “Work at Nornickel” accounts and external outlets, controlled by social media monitoring.

Moreover, all online meaningful negative comments are considered as a “request for information” and require a meaningful response. SMM specialists responded to all identified comments and provided a link to the public accounts. Over time, users started coming to the “Work at Nornickel” accounts and recommend asking questions there. This allowed to channel negative comments about the HR brand to the controlled outlets.

An important instrumental task was to answer questions of family members of employees and applicants, especially their spouses. Analysis showed that the latter were the ones who often had the final word about the job that required moving to another region or suggested long work shifts.

On average, 70 meaningful requests are processed weekly, and the number grows to over 200 during active recruiting campaigns. The Q&A guideline describes more than 40 situations and continues to expand, being constantly updated.

Work with the social media, forums, opinion leaders and digital media allowed to quickly fill 97% of vacancies at Bystrinsky GOK and to significantly change the information landscape around the company on the regional level.

This success became the basis for an update of HR communications on the federal level. “Work at Nornickel” accounts, originally created only for the Trans-Baikal Territory, became a permanent source of new human resources and were complemented by other information instruments:


HR chat bot on the social network VKontakte acts as a resource for collecting CVs and contacts of potential applicants. Users can leave a link to a publicly available CV, upload a document or fill out a short questionnaire. In two months of its operation, applicants submitted 84 CVs and filled out 245 questionnaires. The bot will soon get Nornickel’s white papers for those who have provided their e-mails. 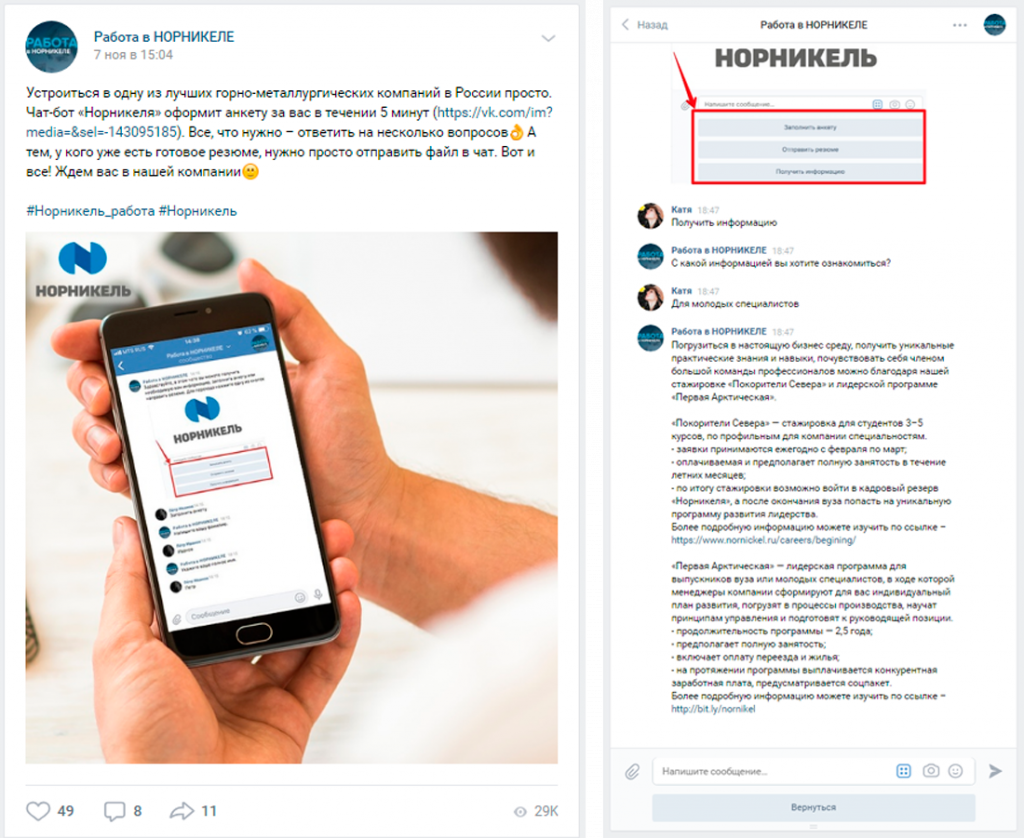 Another top-level target audience was identified after the project reached the federal level – students and graduates of engineering and technological universities who are looking for internship opportunities and a successful career start. The following projects have been targeted at this audience:

An online game “Join the Universiade” was designed for students and graduates. The winners received tickets to the Winter Universiade in Krasnoyarsk with paid travel and accommodation. It was held at Joinuniversiada.ru website and was actively promoted in the social media. Users registered on the landing page using their VKontakte, Odnoklassniki and Facebook accounts and spent 5 minutes answering questions about Nornickel, the Universiade and mining. Almost 900 people took part in the game in 20 days.

The partner project of Nornickel and Lifehacker for students and university graduates “How to get a dream job after university: guide for students” was released in October 2018. In the format of infocards, it told about internships and on-the-job trainings in large companies, as well as about work immediately after graduation for young professionals. Links to the corresponding programs of Nornickel are embedded in the material. As of December 2018, the material was viewed around 16 500 times. 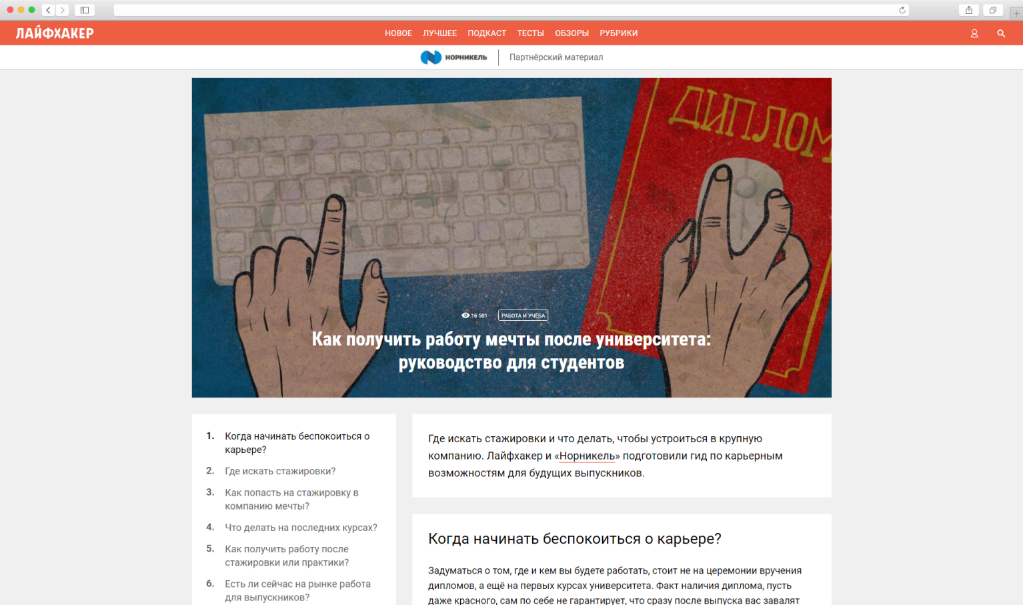 At the same time, throughout the project, the agencies controlled the information landscape in the traditional media where the situation was neutral from the point of view of HR-related issues and did not require immediate intervention. We were working on the communication goal of influencing additional audiences on the regional level, including local officials, opinion leaders and media, as well as local communities. It was meant to establish and support the image of Nornickel and Bystrinsky GOK in the Trans-Baikal Territory as active investors in the region’s economy, implementing infrastructure and social initiatives.

The well-built communication mix makes it possible to constantly increase the reach of the HR campaign and to attract new categories of users.