Hotel promotion on the Russian market

CROS has been promoting Atlantis, The Palm, one of the most luxury hotels in Dubai, for two years. The legendary resort, spanning a massive 46 hectares, is located on the artificial archipelago Palm Jumeirah in the Persian Gulf. It is a popular destination for travelers from around the globe, including many celebrities. Kim Kardashian, Jennifer Lopez, Vin Diesel and many other international stars often come here for vacation.

The resort is one of the leaders by the number of photographs on Instagram. It was ranked 4th most photographed hotel in the world (the top three being Marina Bay Sands in Singapore, Bellagio and The Venetian in Las Vegas). CROS had the goal of strengthening the hotel’s image as a symbol of Dubai. Atlantis, The Palm is a perfect vacation destination regardless of the age, family status and preferences, and the main attraction of the city that any traveler dreams to visit. This was the key message of the communication campaign.

A comprehensive strategy was developed to accomplish the goal. It had the following integral parts: media relations (especially with the top glossy magazines), development of the hotel’s Russian-language accounts on Facebook and Instagram, organization of trips for celebrities and popular bloggers, implementation of special projects with an original format.

Special attention was dedicated in the campaign to the development of the resort’s Russian-language social media accounts. Instagram was chosen to become the key platform for promotion, since traveling and all the related stories are primarily about beautiful visual content. Understanding the distinctive features and the needs of the Russian audience, a separate Russian account of the hotel was launched, presenting original content that differs from the global account.

In the course of the campaign, the number of followers of the Russian-language Instagram account @atlantisthepalm.ru showed gradual organic growth from 500 to 15 000 people. The average number of likes was around 200-300, every post was saved 20-30 times and had the reach of 4 500 - 5 000 people. 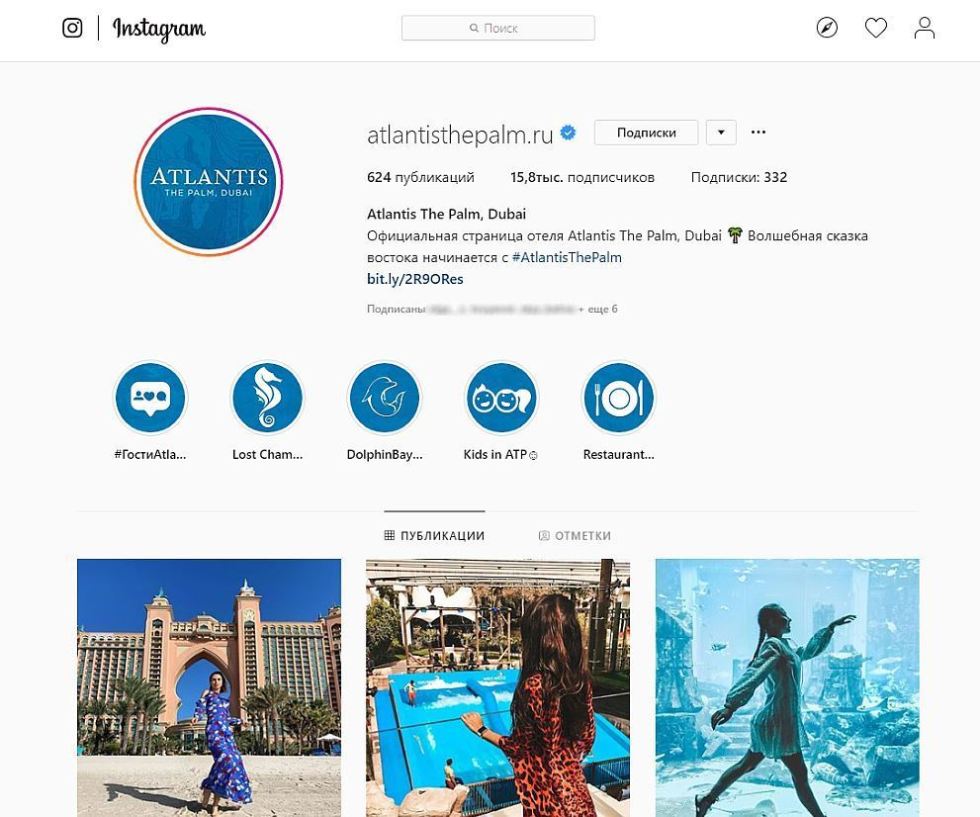 Over 100 travel and lifestyle bloggers were engaged in the campaign, with each of them tagging the hotel’s account. The list of partners had over 30 top bloggers, including Karina Nigay (@karina_nigay), Maria Way (@maria__way), Valeria Chekalina (@ler_chek), Alana Venum (@alana_venum) and others. CROS is also developing and managing the resort’s Youtube channel. Together with popular bloggers, an original Youtube reality show was launched, aiming to show all types of possible vacations that Atlantis, The Palm offers: starting from a calm romantic weekend and finishing with an active family vacation. Three episodes of the show have been released: with Alana Venum (4 600 000 subscribers), Karina Kasparyants (979 000 subscribers) and Maria Ponamoreva (988 000 subscribers).

Moreover, popular TV shows were shot in the territory of the hotel:

Worth of a special mention among other original projects was the joint contest of Atlantis, The Palm and Love Radio radio station. According to the terms of the contest, couples had to make short videos telling their love stories. Authors of the most touching and interesting videos competed for the main prize in the final stage of the contest that was held live during the Love Radio morning show. Five winners went on a romantic trip to Dubai and had a vacation in Atlantis, The Palm where they enjoyed luxury suites and varied entertainment program.

In March 2018, CROS organized for representatives of the travel industry and the media an exclusive gastronomic event “Cirque De Cuisine: Russian Edition”. The gala dinner offered dishes of the resort’s most popular restaurants: Bread Street Kitchen & Bar, Seafire steak house, Japanese Nobu and Lebanese Ayamna restaurants. Guests had the chance to meet the renowned chefs, learned their cooking secrets and tasted delicious meals. A breathtaking circus show with acrobatic stunts became part of the evening program. 120 representatives of Russian tourist agencies and over 50 journalists and bloggers attended the event in the Moscow restaurant Shakti Terrace.

CROS continues successful cooperation with Atlantis, The Palm and plans implementations of other exciting projects to support the resort’s image on the Russian market.