Communication campaign in support of the opening in Moscow of "The Wall of Grief", the first national memorial to the victims of political repression

The one-year project was designed to attract public attention to the history of repression in Russia: certain episodes of the country’s past should be always kept in people’s memory in order to avoid their repetition in the future. In 2018, the project won the “Silver Archer” Award for the best charity project, the Grand Prix of PROBA ICCO Global PR Awards and the Silver Prize of the PRGN Best Practice Awards.

The topic of mass repression that took place all over the Soviet Union in the first half of the 20th century is still a matter of argument and controversy in the Russian society. There is no general consensus about this part of the national history. Opinion polls show that a large part of the population (about 40%) still considers that mass repression were necessary and justified.

Despite the fact that millions of people went through the GULAG system, millions died and that repression affected almost every family in the country, the society is still unable to talk about this topic. 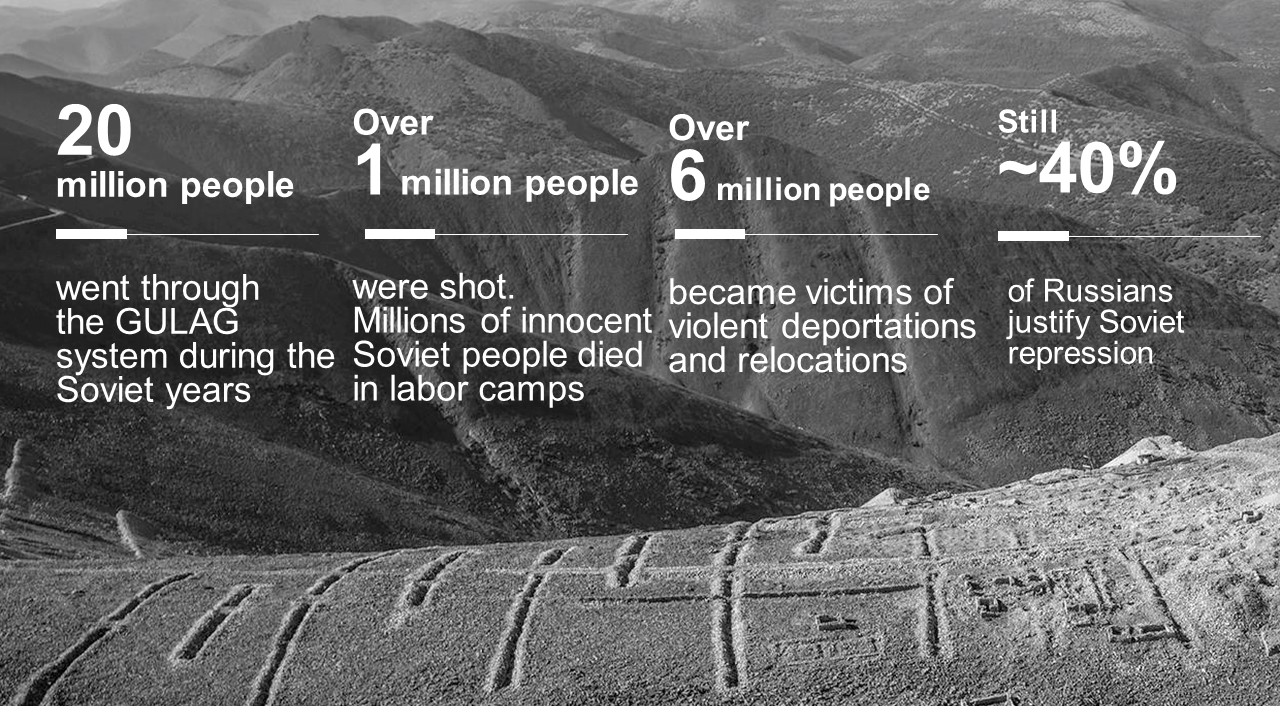 The nation is split on the issue, and against this backdrop the Russian government approved in August 2015 the State Policy to Commemorate the Memory of Victims of Political Repression and the Russian President signed the Order “About the Implementation of a Memorial of Political Repression Victims.” This became reality thanks to the long-term work of public figures and human rights activists who have devoted themselves to commemorating victims of political repression.

The goal of the project was the reconciliation of the society in relation to the tragic pages of the Russian history in order to avoid their repetition in the future.

The design competition for the memorial was won by sculptor Georgy Frangulyan with the monument “The Wall of Grief.” In 2016, the Memory Fund was established to support educational and research programs and activities aimed at commemorating the memory of mass repression victims. “The Wall of Grief” memorial became its first large-scale project: the Fund coordinated all the works related to the construction, conducted a public fundraising campaign and secured communication support for the project in general. The Moscow Government and the Presidential Executive Office also provided comprehensive support to the project.

The Fund’s communication campaign was designed to draw public attention to the topic of remembrance of the mass repression victims. The society needed to be prepared for the appearance of such a monument in Moscow. It was necessary to channel discussions about the attitude to political repression, making it unacceptable regardless of the political situation, views and beliefs.

The super-idea of the campaign was to establish social consensus about of the large scale of the tragedy that the country lived through with the sole goal of preventing its repetition in the future.

The project’s communication strategy and its implementation were done by the team of the Memory Fund, the Gulag History Museum and CROS. Taking into account the nature and social significance of the project, the CROS team participated in the project on a pro bono basis. The ultimate goal of the communication campaign was to foster the culture of remembrance for victims of mass repression. The development of the project’s communication strategy started with a public opinion research, analysis of the media landscape and evaluation of the possible risks. This work allowed to come up with a certain approach to communications and to choose particular instruments.

It was important to consider the fact that it was a nonprofit project that should have been based on developing partner relations with the media, NGOs and nonprofit organizations, philanthropists and sponsors, public authorities.

Construction of the memorial and establishment of the Memory Fund together were the first project in the modern history of Russia, initiated by the society and supported by the state. The project had the goal of making commemoration of political repression victims a universal and nation-wide movement. One the one hand, it required the communication campaign to have as broad coverage as possible, and on the other hand, it had to have minimal and absolutely transparent costs since its implementation actually used private donations.

“Know, never forget, condemn. And forgive” – these words by Natalia Solzhenitsyna, pronounced at one of the press events, reflect in the best way the core idea of the project and were used as the slogan of the campaign.

The official opening of “The Wall of Grief” memorial with the participation of the Russian President Vladimir Putin was the pinnacle event of the campaign.

All projects within the communication campaign were implemented as pro bono partner agreements.

The Memory Fund partnered with:

Over 15 video interviews were recorded with many prominent and distinctive Russian people, including Pavel Lungin, Yevgeny Mironov, Vladimir Pozner, Andrei Makarevich, Leonid Parfyonov, Ilya Lagutenko and others. They shared their thoughts about repression and the importance of keeping the memory of the innocent victims. 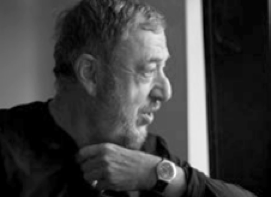 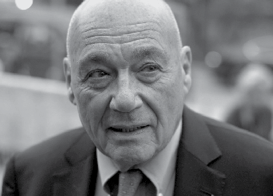 Pop-up Exhibition “The Wall of Grief”

“The Wall of Grief” pop-up exhibition was held in 10 cities of Russia. It was visited by over 30 000 people. The opening ceremonies were attended by the local top-level officials. The exhibition was mentioned in over 1000 articles in the media, mostly regional outlets. 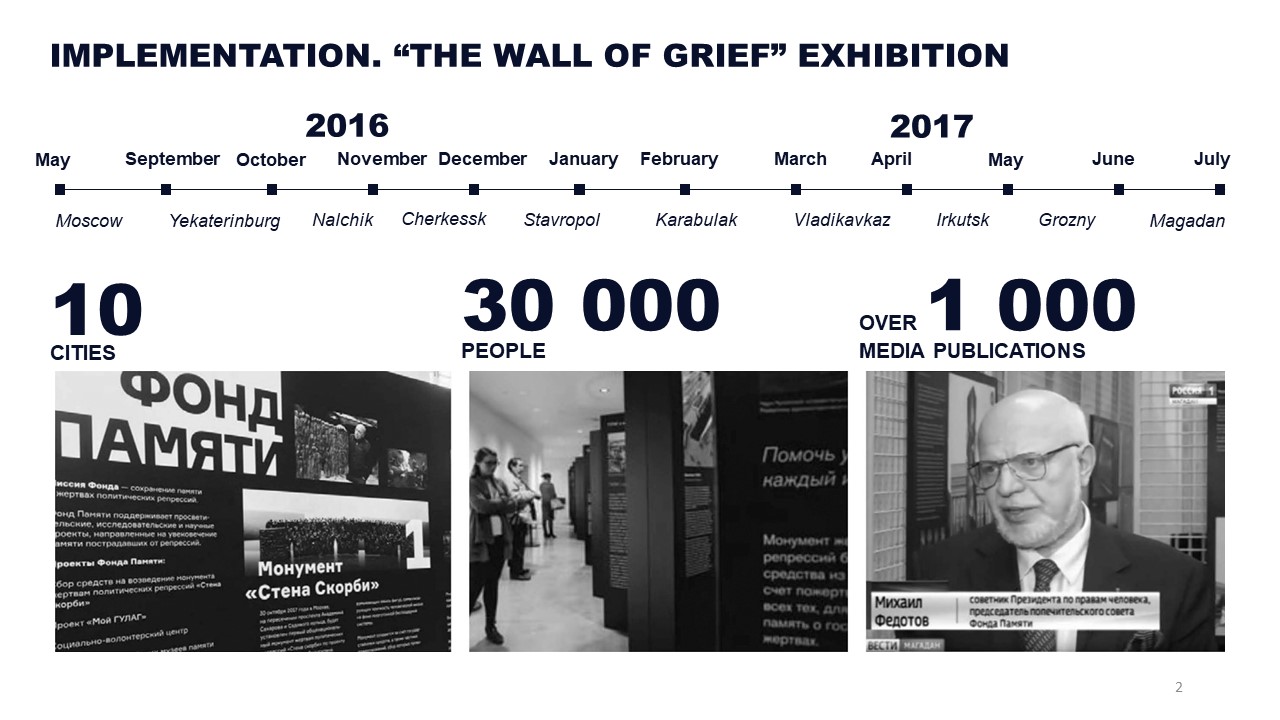 The Memory Fund organized the national campaign to gather natural stone from places linked with the history of repression from all over Russia. 58 regions supplied 173 pieces of stone that became parts of “The Wall of Grief” memorial.

Regular media events were held as part of the campaign to provide details about different aspects of the project’s implementation. All media events of the Memory Fund were regularly attended by representatives of the leading federal TV channels and other media (Channel One, Rossiya 1, Rossiya 24, TVC, NTV, Rossiyskaya Gazeta, Kommersant, etc.). 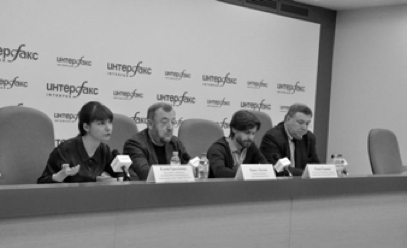 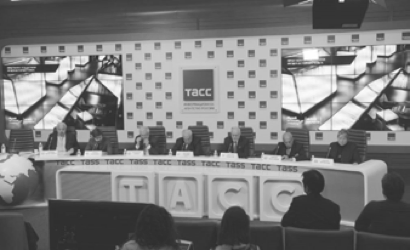 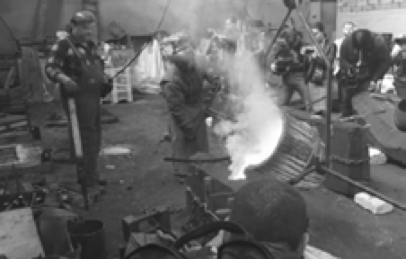 Presentations of joint polls with VCIOM

The joint project of the Memory Fund and the Russian Public Opinion Research Center included a series of public opinion polls about attitude towards the mass repression of the 20th century. The main goal of the research was to get a comprehensive picture of what Russians think about the scale and the character of repression, the role of the state’s leadership in its organization. 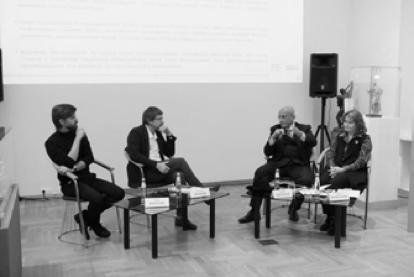 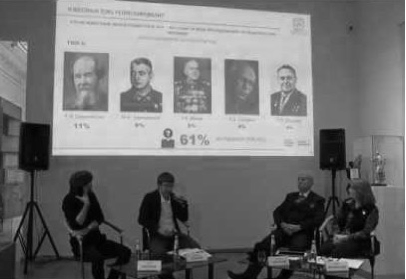 Partnership with the “Moscow House of Books”

Launch of a long-term partnership program with the “Moscow House of Books”. The project includes a series of lectures, meet-the-author nights and stands with specialized literature in the largest stores of the chain. 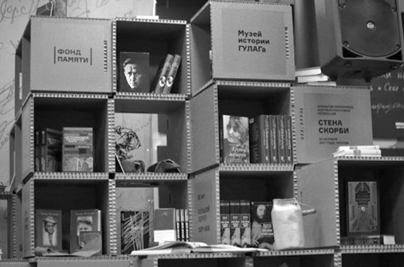 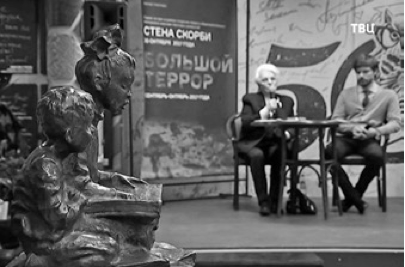 Literature nights at the Higher School of Economics

The project’s goal was to attract attention of younger audiences to the topic of commemorating victims of political repression and the opening of “The Wall of Grief” memorial. Theater and film actors read literature pieces about the political repression of the 20th century during literature nights that were broadcasted online on the websites and in the social media channels of the Memory Fund, the GULAG History Museum and the HSE University. The cycle was opened by Lyudmila Ulitskaya, who read a fragment from her work “Jacob's Ladder”. “Prosveschenie” channel requested the HSE University and the Memory Fund to broadcast the evenings for educational purposes. 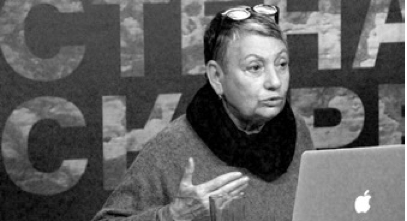 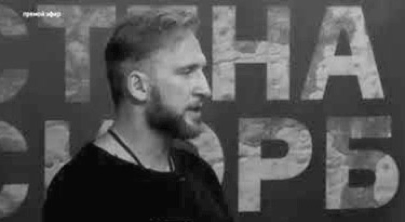 The Memory Fund aims to speak about repression with various audiences choosing the most appropriate formats. Video films are one of the most engaging and convenient forms of delivering information about the history of repression to audiences in different regions of the country. The Fund supports “My GULAG” project – video interviews with the witnesses of the time. A series of films about research expeditions of the museum was created.

The Memory Fund initiated production of a film about the creation of the first national memorial “The Wall of Grief” for Moscow 24 TV channel. The Fund and the GULAG History Museum provided thematic materials, locations and speakers. The film titled “The Moscow Wall of Grief” was broadcasted in the run-up to the memorial’s opening. 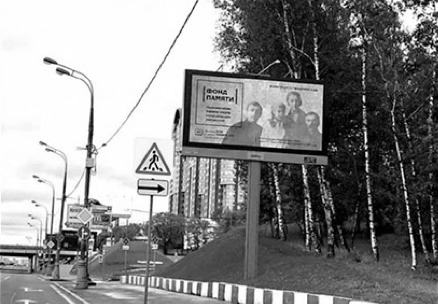 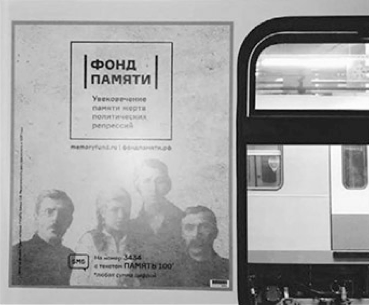 Communications in the digital media were based on the idea that the story of repression should be told without begging for sympathy. The project’s creative team managed several communities in the social media and produced for them unique content based on historical facts. It was also distributing and adapting the content, created as part of other events of the campaign. Organization of the opening ceremony of “The Wall of Grief” memorial on 30 October 2017 with participation of the country's top leaders was the pinnacle event of the campaign. The project team took part in drafting the ceremony’s scenario, organized participation of repression victims and their families, organized the public part of the ceremony open for everyone who wanted to lay flowers, light candles and commemorate millions who died in repression. Preparations for the ceremony included a range of issues related to musical and visual design of the event, as well as media relations. 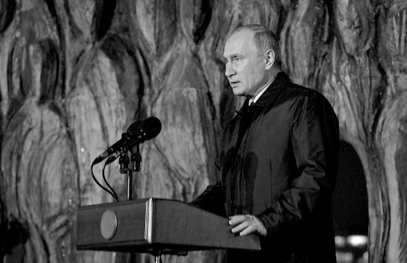 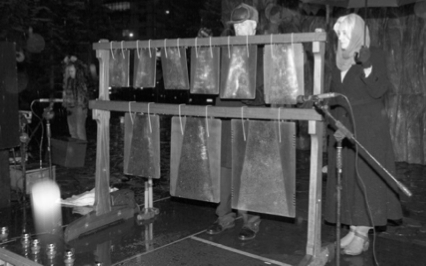 The following results were achieved during the one-year communication campaign in support of the opening of the first national memorial to political repression victims “The Wall of Grief”:

The topic of mass repression of the 20th century cannot stand indifference. Thanks to the Memory Fund’s communication campaign in support of the opening of the first national memorial “The Wall of Grief,” people that have never heard about repression learned what it took place, while those who justify them got an opportunity to think again and change their attitude towards the tragedy. Perhaps, it made some people want to learn about the history of their own family. 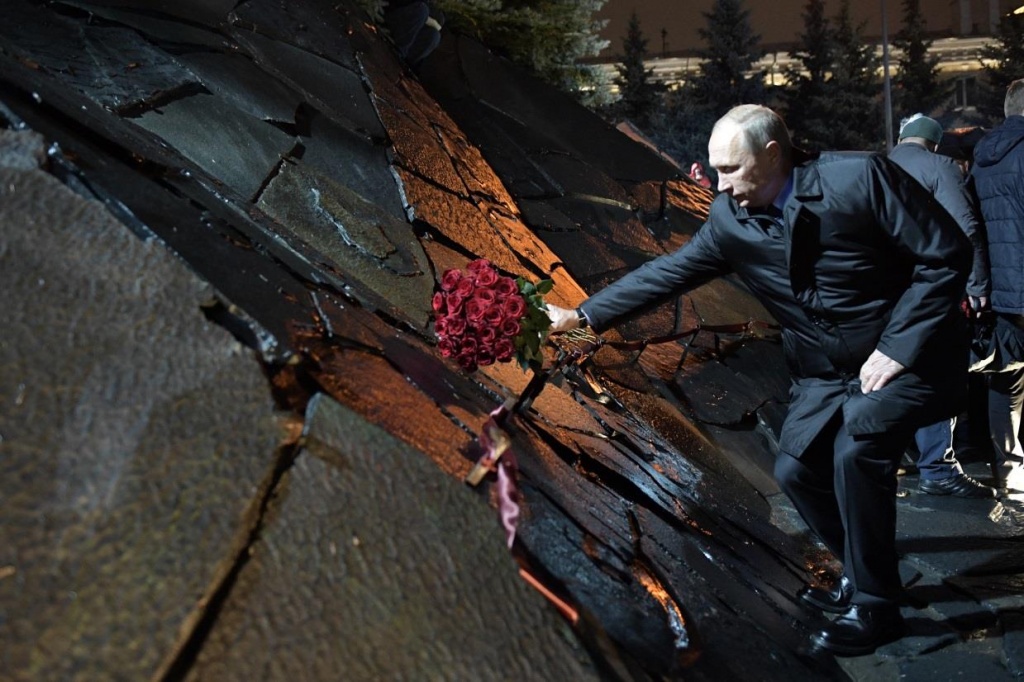 “For all of us, for the future generations, it is very important to know and remember this tragic period in our history when classes and ethnic groups were made victims of the terrible persecution. Repression did not take mercy on talent, merits to the Fatherland or love for the country. Repression became a tragedy for the whole society, a violent blow on the nation, its roots, culture and self-identity. We still feel its consequences. The terrible past cannot be erased from the national memory. Neither can it be justified. No national welfare can be an excuse for such things. Our duty is not to tolerate oblivion. Remembrance, clear and common judgment of those terrible events are a strong precaution against the repetition of repression.”